The 2017 Dodge Durango changes are coming soon to Edmonton, Vancouver, and Calgary, and the staff at Derrick Dodge is pretty excited to share them. With rumors of upgraded tech and enhanced performance, this Durango looks to be the best one yet. While we don’t have all of the details, including the redesign’s release date for the debut or the new price, we do have some exciting morsels that we think you’ll enjoy.

The 2017 Dodge Durango will see a number of noticeable upgrades for the 2017 model year, not the least of which is the change in size. The new Durango is rumored to be larger than its predecessor, although numbers aren’t available, but sneak peeks of the upcoming 2017 model reveal sleeker profile, which should translate into more interior space and better legroom.

The Durango is also thought to be in line for a technology upgrade, receiving the new Uconnect system with a standard 8.4-inch color touchscreen interface, which is larger than previous years. This would be an improvement over the current 7-inch screen and provide drivers with a better experience making it easier to see things like navigation graphics and vehicle information.

Performance may get a boost as well, with spies telling us that the towing capacity has increased to a maximum of 3,356 kg, although the engines and transmissions are rumored to remain the same.

Continuations from the 2016 Model

Dodge has mentioned no plans to change the Durango’s most popular convenience features. That means we can expect that items like the Keyless Enter ‘n Go system that includes a proximity key and pushbutton start will carryover. Options like remote start and the ParkView rear backup camera work with the Park-Sense Rear Park Assist feature to make it easy not only to park the vehicle in tight urban lots, but also to hook it up to a trailer and take a break from the city. 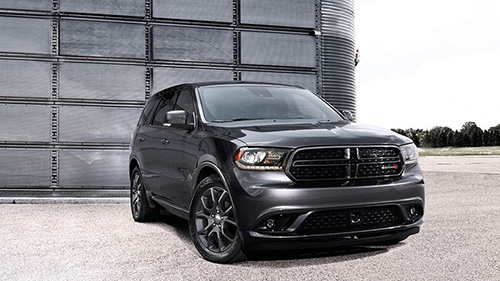 The Dodge Durango is designed to be more than just a family hauler. This rugged SUV provides power, comfort, and superior design that make it just as well suited to the wilds as it is to the suburbs.

Learn More About the 2017 Dodge Durango Coming to Edmonton, Vancouver, and Calgary

Contact Derrick Dodge, Chrysler, Jeep, Ram at (780) 435-3611 to learn more about the upcoming 2017 Dodge Durango redesign coming to Edmonton, Vancouver, and Calgary, or visit our showroom at 6211 104th Street in Edmonton to see the 2016 models in stock now.

Images shown are those of the 2016 model.
CONNECT
Search
Find Your Vehicle ×